This article explains why mat density is important in golf practice and why you should avoid practice on traditional hard synthetic golf mats .

To best explain why golfers should avoid practice on traditional hard golf mats, we will first give you a quick overview of how TrueStrike Golf Mats work and how they differ from traditional golf mats.

Unlike traditional hard synthetic golf mats that tend to be thin rubber backed Astro Turf, the TrueStrike gel section has a gel divot subsurface that lets you hit down and through the shot like you would on turf. This is because the gel section has a gel subsurface that is integrates into the mat by being placed beneath the non-stretching ‘woven turf’ strike surface material. 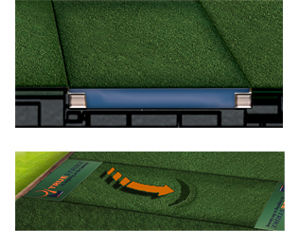 The woven turf, works in conjunction with the gel/foam subsurface to create very realistic energy dispersion’s when struck at high speeds with the force of an iron. Which in turn results in the replication of hitting from the fairway.

Below we explain in more detail why the density of your Strike Surface is important:

On good contact with an iron from a True Strike Mat, the ball will be struck first, in a downward motion. This downward strike is what causes spin because the ball will pinch between the club face and the turf below, subsequently traveling out and up. On traditional mats the spin rate is inaccurate because the surface below is either too soft or too hard, however both result in lower spin rate. A lower spin rate causes the ball to “jump” and carry a longer distance because it never “tops out”. Ultimately spin is what makes a well struck iron shot to carry the correct distances.

Traditional hard synthetic golf mats, like you’ll see at a range sitting on top of concrete along with the characteristic of being too hard or too soft are the main reason for bad contact. When struck the club head is “re-positioned” upward when a fat shot is struck, this re-positioning upward causes you to hit what you think is a good clean shot. The fat swing hits the hard mat first and is pushed up during that millisecond prior to contact. Not only does this produce an inaccurate shot, but also can be damaging to your health as it causes a common injury called “golfer’s elbow”. An often recurring ailment which can and will last for years, due to the energy dispersion that travels up the club head and through the shaft, up into your arms.

On traditional range mats that are too soft, the club head is allowed to more movement under the ball and even though you’re catching it a groove or two high on the face, it will still fly out at speed, with a lower spin rate, because it hasn’t hit the sweet spot on the club face.

Conversely, when struck you catch the True Strike Surface a bit fat, say a groove or two high, and you’ve hit the mat first. This will cause the club head to slow down and you’ll hit the fat shot like you’re used to on the course. A real fat shot should causes the face angle to change, as it makes contact with the ground, resulting in the high flame outs or the low going shot. The slow mo footage below demonstrates actual feedback on a fat shot TrueStrike can provide, which in comparison to traditional golf mats is a level of feedback they cannot offer.