They were all hoping for a Hole-In-One, which would win £100,000 for their chosen charity. Unfortunately no one managed the elusive shot but Lynam, a Ham Manor member who plays off 15, showed his short game was up to scratch by landing a ball on the floating green.

Hill, A Berkshire Golf Club member who plays off 18, joked “I’m not a long hitter these days. But do hit the green what a player!” 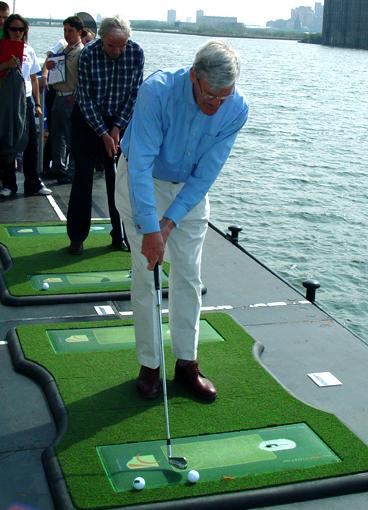 TrueStrike also teamed up with Young Masters Golf and provided mats for their busy demonstration area.

David Gosling, managing director of YMG, said about the mats “The overriding benefits as far as YMG are concerned are the one’s that affect young golfers health. The impact absorption offered by the special striking surface means the risk of injury from the cumulative affect of many hours of practice on the golf range is greatly reduced”

The TrueStrike mat was used throughout the 4-day event after being selected to be the show’s official mat. During the event thousands of golfers took the opportunity to try out the mats at the 28 bay driving range and club testing area as well as numerous other locations around the show.